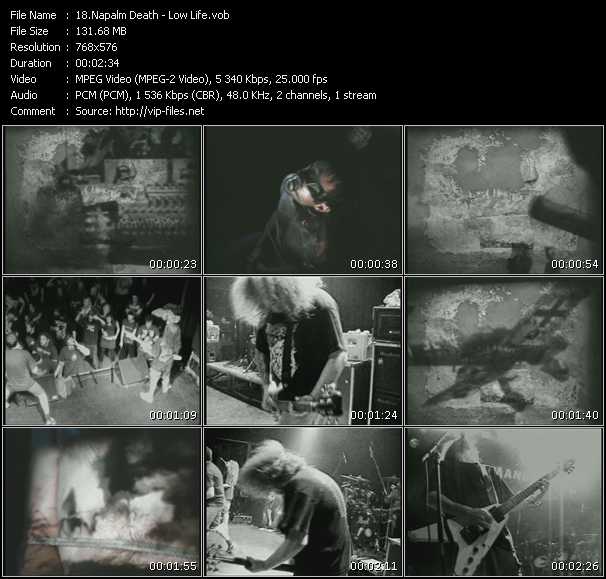 Napalm Death video When All Is Said And Done

DVD: Metal For The Masses

Formed in Birmingham, UK in 1982, by Nik Bullen. Napalm Death were originally one of the bands that defined the UK hardcore thrash/punk sound of the mid-late 1980s, along with bands such as Extreme Noise Terror, Doom and Sore Throat. The band has gone through countless line-ups and many former members have gone on to become significant figures in a variety of musical scenes. Although their debut album "Scum" featured members Justin Broadrick (who was also a member of Fall Of Because, the band that later became Godflesh, at the time) and Nik Bullen (later part of Scorn), the first stable line up consisted of Lee Dorrian (vocals), Bill Steer (guitar), Mick Harris (drums) and Shane Embury (bass). By late 1989, Lee Dorrian, whose vocals epitomised the early Napalm Death sound, had left to form another band (doom metal band Cathedral) and focus on his label Rise Above. Bill Steer also left to concentrate on his other band, Carcass. Dorrian was replaced by former death metal band Benediction's vocalist Barney Greenway, and an American guitarist, Jesse Pintado, was recruited from fellow Earache label-mates Terrorizer. A short time later Mitch Harris from Las Vegas' grindcore outfit Righteous Pigs joined as second guitarist. Mick Harris left the band in 1991 and has since been involved in a plethora of solo and joint projects/collaborations as Scorn, Lull, Quoit etc. He was replaced by Danny Herrera, an old friend of Jesse's from Los Angeles. This line-up lasted until 2004, when Jesse Pintado left the band. Currently the band consists of Barney Greenway, Mitch Harris, Shane Embury and Danny Herrera.