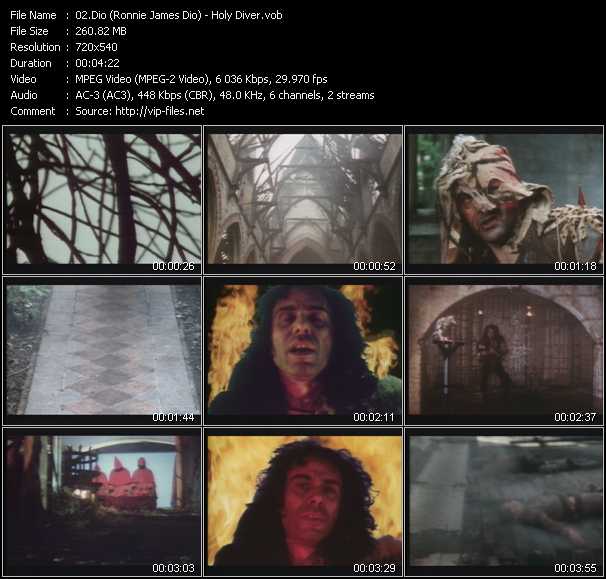 Dio was a heavy metal band formed by singer Ronnie James Dio and drummer Vinny Appice in 1982 following their depature from Black Sabbath. Although Ronnie claimed that his intention was to form a band and not a solo project, he remained the only continuous member and the prime creative force in the band throughout its lifespan. The original line-up was rounded out by bassist Jimmy Bain and guitarist Vivian Campbell for the band's debut, 1983's "Holy Diver". The album remains the group's most well-known and commercially successful release. The band added keyboardist Claude Schnell afterwards and this line-up appeared on the band's next two LPs, "Last In Line" and "Sacred Heart", both of which were commercial successes. Vivian Campbell left the band in 1986 and was replaced by Craig Goldy for 1987's "Dream Evil". However, by the time Dio released their next album, 1990's "Lock Up The Wolves", the group's popularity was waning and the band had undergone a complete overhaul, with only Ronnie remaining from the original line-up. By the start of the 1990s, both Dio and Ronnie's former band, Black Sabbath, saw that their separate commercial fortunes were waning. In an attempt to rekindle their old magic, Ronnie put Dio to rest and joined forces with Vinny Appice, Geezer Butler, and Tony Iommi for the 1992 Black Sabbath record, "Dehumanizer". The release met with a largely positive reception from most fans but old personal issues were still unresolved and Ronnie and Vinny departed Black Sabbath again in 1993 and launched a new version of Dio. The new band included guitarist Tracy G, bassist Jeff Pilson, and keyboardist Scott Warren. This line-up recorded 1994's "Strange Highways" (Dio's last album for a major label) and 1996's "Angry Machines". These albums saw the band turn away from the "sword & sorcery" lyrics and traditional heavy metal sound of the old days and move towards more modern sounds and lyrical issues. Many fans were not receptive towards these changes. 2000's "Magica" not only saw Dio return to the "classic" sound of the band, but also saw the return of Jimmy Bain, Craig Goldy, and drummer Simon Wright (the latter of whom had played on "Lock Up The Wolves"). The follow-up to "Magica", 2002's "Killing The Dragon" saw Goldy replaced by Doug Aldrich. In 2004, Goldy would return to replace Aldrich and Jimmy Bain quit the band again. Jeff Pilson would return for bass duties on 2004's "Master Of The Moon", although other obligations prevented him from touring so Rudy Sarzo joined as the band's live bass player. Doug Aldrich replaced Goldy again in 2005 and appeared on two live releases, "Evil Or Divine - Live In New York City" and "Holy Diver - Live", before Goldy would once again rejoin the band in 2006. In 2007, the Dio band went on hiatus again as Ronnie re-teamed with Geezer Butler, Tony Iommi, and Vinny Appice to form Heaven & Hell. Although, Ronnie stated that the Dio band would continue, with plans for making "Magica II" and "Magica III", this would not come to pass, as in late 2009, the singer was diagnosed with stomach cancer. He passed away in May 2010.

Born as Ronald James Padavona in Cortland, NY, on July 10th 1942. Ronnie adopted the surname "Dio" sometime in the early '60's, taking inspiration from mobster Johnny Dio. He is considered one of the greatest heavy metal singers of all time and is known for his fantasy-based lyrics and "sword and sorcery" image. Ronnie James Dio first began to gain national notice in the '70s when he fronted the rock group Elf, but his career stretched back to the mid '50s when he performed and recorded with local rockabilly, doo wop, and rock and roll groups in his native upstate New York (these recordings, some of which date to the late '50s, are now highly prized collector's items). Elf caught the attention of Deep Purple and the two groups toured together a number of times in the early '70s (Ian Paice and Roger Glover also produced Elf's debut LP). Ritchie Blackmore recruited most of Elf for his new band, Rainbow in 1975. Rainbow was the first time that Dio experienced some international stardom and also saw his first steps into the genre of heavy metal. In 1978, after 3 successful studio albums, Dio and Blackmore parted company when Blackmore decided to take Rainbow in a more commercial direction. The following year, Ronnie joined Black Sabbath, who, at the time, were mired in a creative and commercial slump. The addition of Dio reinvigorated Black Sabbath and their first album together, 1980's "Heaven And Hell", became a major hit. The album allowed Dio to explore darker and heavier territories than he had been able to do in the past and is still cited by the singer as his favorite release of his career. Dio recorded another studio album with the band, but tensions ran high between Ronnie and Sabbath mainstays Tony Iommi and Geezer Butler. The situation dissolved completely during the mixing of the live album "Live Evil" and Dio departed the group, forming his own band, DIO with Sabbath drummer Vinny Appice. Dio experienced more success with 1983's "Holy Diver" and 1984's "Last in Line". By the beginning of the 1990s, though, both Black Sabbath's and Dio's careers were in commerical and critical decline. In 1992, Dio rejoined Black Sabbath to record the "Dehumanizer" album. By most accounts, the reunion was an uneasy one and Dio quit the group again when Tony Iommi and Geezer Butler agreed to open a show for original Sabbath frontman Ozzy Osbourne without consulting their current vocalist. Ronnie resurrected the Dio band and continued on with them for the rest of the decade and beyond. In 2007, having put their animosities behind them, Iommi and Dio reunited to write three new tunes for a Dio-era Black Sabbath compilation that was being assembled by Rhino Records. This resulted in a reunion with Butler and Appice for the recording of the new songs and tour to celebrate the compilation's release. Deciding that they only wanted to focus on the Dio-era of the band, the quartet decided to tour under the name Heaven & Hell. The tour was such a success that Heaven & Hell decided to press forward with new material, recording and releasing a new studio album in 2009. In late 2009, Ronnie was diagnosed with stomach cancer. On the morning of May 16th, 2010, Ronnie James Dio passed away due to complications to his disease. He was married to Wendy Dio who also was his manager.